Choux etc est actuellement en congés, nous revenons bientôt ! // Choux etc is currently on holidays, we will be back soon! 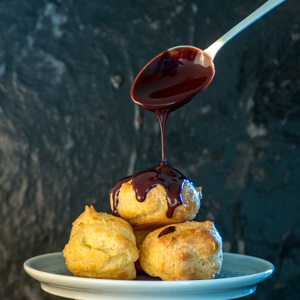 A favourite dessert from my childhood, and certainly somewhere one of the founding stones of Choux etc!

In the 17th century, the recipe evolved and they are balls of bread containing meat cooked in a soup.

The recipe we use today is said to have been initiated by Penterelli, who developed a “hot dough”, a dough dried out on the fire. Popelini, cook of Catherine de Médicis, takes this recipe and decides to garnish this hot dough with fruit jelly and calls them the dolls.

It was finally in the 19th century that Jean Avice, disciple of Antonin Carême (high priest of pastry), who decided to garnish the choux pastry with pastry cream or whipped cream.

Adding chocolate sauce and garnishing with vanilla ice cream is said to have been done around 1875.

NOTE. The Profiteroles can therefore be garnished with your choice of pastry cream, whipped cream or ice cream. The family recipe I’m sharing with you today uses a variation of custard (pastry cream).

Pour the water, salt, sugar and butter in a saucepan. Heat gently to melt the butter. Once the butter has melted, bring to a boil.

When the liquid boils, remove the pan from the heat, add the flour all at once and try to incorporate it as quickly as possible with a spatula.

NOTE. The dough obtained at this time is called the “Panade ”, it is used in making choux pastry, quenelles, or dauphine potatoes.

Return the pan to low heat and dry the “Panade”, stirring constantly, until the dough has a slightly shiny / gleaming appearance. A film of dough will have settled at the bottom of the pan.

Place in a bowl and immediately put a little water in the bottom of the pan to be able to clean it more easily later.

Add the eggs one at a time. The dough breaks up with each addition, this is normal, stir with a spatula until the dough is smooth again. The choux pastry is ready when the dough has the “soft bird’s beak” texture: take out the spatula vertically and put it horizontally, the dough tip should fall gracefully, forming a quarter of a circle or the beak of a bird of prey.

NOTE. The choux pastry can be used for several shapes of pastries, only the way of shaping it before baking changes the name: Chouquettes, Eclairs, Saint-Honorés, Salambo, Swans, Paris-Brest, Nuns …

NOTE2. A version without sugar and with the addition of grated cheese will give Gougères, always a success as an appetizer!

With a brush or a fork, cover the Choux with the beaten egg. Apply a fork on each Choux to make crosses on top. This will help the Choux to grow more evenly.

NOTE. Do not open the oven at the beginning of cooking, the Chou will fall out. After 20 minutes, it shouldn’t be a problem to quickly open the oven to check the doneness: already at the color, and then to be sure, tapping with a fingernail under the Chou, it should ring hollow.

NOTE. For the flavour, vanilla remains the “classic” today for this dessert, but you can completely flavour the cream with whatever you want: praline, pistachio paste (and then opt for a red fruit coulis), chocolate for chocolate profiteroles …

Pour the milk and the perfume into a saucepan.

Clarify the eggs (separate the whites from the yolks). Add sugar and flour to the yolks and mix.

Boil the milk. Pour half of it over the egg yolk-flour-sugar mixture. Homogenize quickly. Return to the saucepan and mix well. Return to the heat gently while stirring continuously, but slowly, scraping the bottom of the pan well so that nothing sticks and the cream cooks evenly). Even if you return to low heat, the boil will resume. This is normal, keep stirring (vanner in French) and allow 2 minutes from the start of the boiling, then put in a bowl.

If you have a kitchen thermometer: above all, do not exceed 85 ° C, this is the coagulation temperature of the egg yolks, you would end up with small pieces in your cream, omelette style …

Whip the egg whites but not too firm: they will incorporate better if they are flexible. Add them to the custard.

NOTE. This latest addition of raw egg whites to the pastry cream is a family recipe and doesn’t match any other recipe I’ve been able to find. Moreover, I have not found any reference elsewhere to the name “Saint-Honoré cream” which is used in the grimoire of my family recipes … The connection seems to me to be with the “Chiboust ” cream, often used in the making of Saint-Honorés, and which can be, according to the recipes, based on Italian meringue (egg whites whipped to snow and cooked with a sugar syrup)

NOTE 2. The fact of adding the raw egg whites means that the shelf life of this cream will not be long (24 hours maximum). You can also use the pastry cream without the whites.

NOTE 3. Pastry cream is another derivative of “custard”, which I have already mentioned for snow eggs and migaine, used for quiches.

When the puffs have cooled, garnish them with Saint-Honoré cream: with scissors, cut a “hat” from each Choux, garnish generously with cream using a small spoon and replace the caps.

If you have a pastry bag, you can also make a cross under each Choux with the blade of a knife and garnish them from underneath.

Reserve in the refrigerator until ready to taste.

NOTE. If you have any pastry cream left over, you can simply serve it in small jars with fresh fruit.

Gently melt the chocolate with the butter in a double boiler. Homogenize while stirring and serve hot.

NOTE. Chocolate does not tolerate high temperature, which is why it is often melted in a double boiler, which prevents it from coming into direct contact with the heat source, melting is smoother.