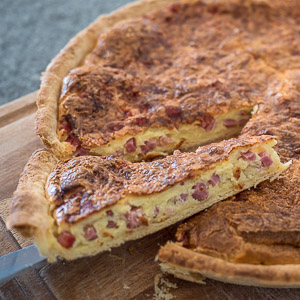 A classic in my family, a memory of Sunday evenings, at the family table or to take away for my trip back to my student room.

I give you a shortcrust pastry recipe if you want to make it yourself, otherwise take or make the dough you like!

TRICK. From the moment you have incorporated the egg and flour – and this applies to all pasta recipes – work the dough as little as possible, otherwise it will develop gluten and its elasticity. Resting the dough will make it less elastic and it will shrink less during spreading and baking.

With my scraps of dough, I make some crackers for the aperitif:

Mix it all up! With a whisk, it’s easier. If you like a “flan / clafoutis” texture, beat hard until there are no lumps. . If you prefer a lighter, more airy texture, don’t beat too hard and stop when there are still a few small lumps.

HISTORY. The quiche recipe has evolved a lot since its first mention in the 16th century.

The name comes from the Lorraine region “kich” (cuisine) which originates from the word “küche” (kitchen in German).

The first written recipes date from 300 years later… And they are more like what we call today a pie: a device based on white poppy soaked in water overnight, ground, to which milk was added, cream and chopped onions in butter. The whole enclosed between two pastas and gilded with egg yolk.

It is around 1870 that we find a version with eggs and cream, but without bacon!

Today’s recipes have replaced some of the cream with milk to make it a little less rich, some add grated cheese, but if you do not want to get in any trouble with a Lorraine guy, then never say that this is a quiche!

IDEAS. This classic recipe serves as the basis for very different tastes: you can add a variety of garnishes: ham / spinach, chicken / mushrooms, tuna / ratatouille, salmon / leeks, onions … You can also put herbs or spices in the Migaine : I often make a garnish with toppings of cauliflower with a migraine with cumin, or a garnish with cherry tomatoes in summer with a Migaine of oregano (or thyme …), and for the cheese, we can add gruyère, emmental, parmigiano …

I love this recipe, which is so adaptable and always quick to make, tell me if you liked it and how you adapted it at home! 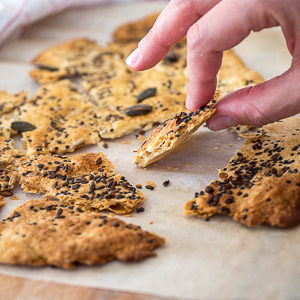 With my scraps of dough, I make some crackers for the aperitif: